The Biden administration unveiled plans to develop large, grid-transforming offshore wind farms along much of the U.S. coastline in the coming years, a major effort to invest in renewable energy and combat the growing impacts of climate change.

Interior Secretary Deb Haaland said Wednesday the government would begin work to identify seven major zones where it could lease federal waters to offshore wind development. Auctions could take place by 2025, a major step toward President Joe Biden’s pledges to build 30,000 megawatts of offshore wind energy by 2030, an amount that would power up to 10 million homes.

“The Interior Department is laying out an ambitious roadmap as we advance the Administration’s plans to confront climate change, create good-paying jobs, and accelerate the nation’s transition to a cleaner energy future,” Haaland said. “We have big goals to achieve a clean energy economy, and Interior is meeting the moment.”

The proposed areas include almost the entire East Coast from Maine down to the Carolinas, the Gulf of Mexico, and coastline along Oregon and California. The plan is an aggressive move that would aid the White House’s goals to slash the nation’s fossil fuel emissions by the end of the decade and meet targets scientists have long stressed are needed to avert the worst effects of climate change.

From offshore wind projects to solar farms on our public lands, @Interior is working hard to harness clean energy towards a resilient, sustainable future. @POTUS’ proposed investments into climate-related innovation will take us to the next level.

Biden has pledged to cut the nation’s fossil fuel emissions — potent greenhouse gases ― by 50% of 2005 levels by 2030. The U.S. is a latecomer to offshore wind, which has been heavily deployed across much of Europe.

The Bureau of Ocean Energy Management, a branch of the DOI, said the new projects could create nearly 80,000 jobs. The Associated Press notes Haaland is also working to increase renewable energy production on land, including greater investment in wind and solar power by 2025.

While the plans could revolutionize the U.S. power grid, they still face uphill battles. The New York Times reports that even if the sites pass lengthy regulatory reviews, there is no guarantee companies will lease the space to build the turbines. The newspaper adds that offshore wind projects have also been subject to lawsuits from commercial fishing groups and coastal landowners, and oil and gas companies could claim that the renewable projects might damage their own business models.

Interior Department officials said they plan to work closely with industry stakeholders to “establish confidence” in the offshore wind plans. 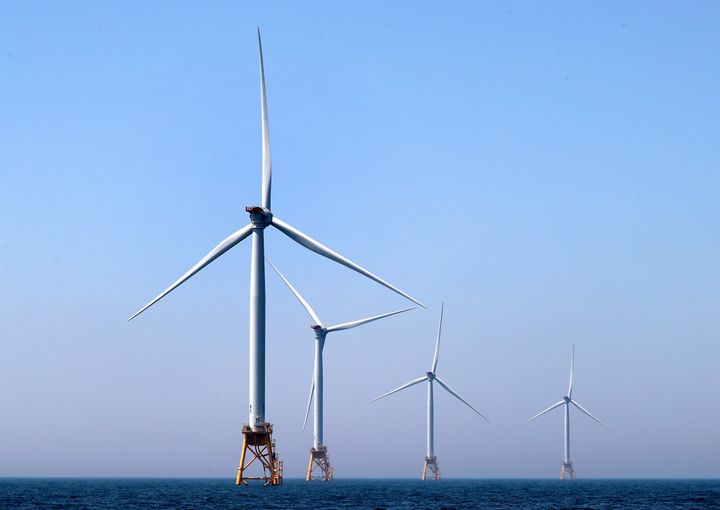 The Block Island Wind Farm off the coast of Block Island, Rhode Island, is pictured on Jun. 13, 2017.

The Department of Energy also said Wednesday it would spend $13.5 million to study the risks of offshore wind development to wildlife, including birds, bats and marine mammals.

“Harnessing the incredible potential that exists within offshore wind energy is an essential piece of reaching a net-zero carbon future,” Energy Secretary Jennifer Granholm said in a statement. “In order for Americans living in coastal areas to see the benefits of offshore wind, we must ensure that it’s done with care for the surrounding ecosystem by co-existing with fisheries and marine life — and that’s exactly what this investment will do.”

The Biden administration only approved the nation’s first commercial-scale offshore wind farm in May — the Vineyard Wind project, which lies about 12 nautical miles off the coast of Martha’s Vineyard, Massachusetts. The project is expected to generate about 800 megawatts of electricity that could power up to 400,000 homes.

These 22 Actors Came Clean About Crushing On Costars They Never Actually Dated, And It's Cute As Hell