Murals at a San Francisco School Should Stay for Now, Judge Says

Art & Design|Murals at a San Francisco School Should Stay for Now, Judge Says

In response to a lawsuit, a judge says an environmental review must take place before any action is taken to remove or hide the Depression-era murals that some consider offensive. 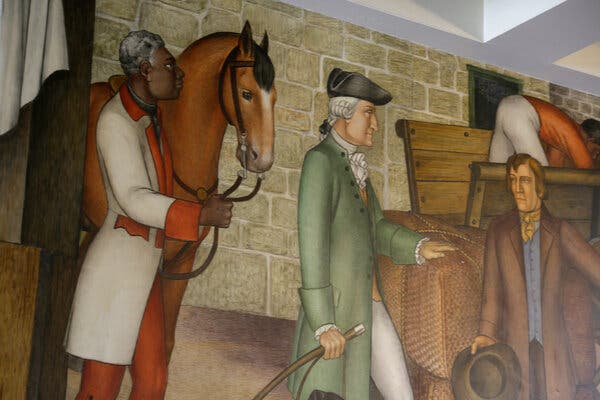 A part of “The Life of Washington,” by Victor Arnautoff, at George Washington High School. A judge has ruled that the artwork should stay.Credit...Eric Risberg/Associated Press

A California court this week ruled that Works Progress Administration frescoes depicting the life of George Washington cannot be removed from a local high school without an environmental review, thwarting the San Francisco Board of Education’s plans to cover up the hotly debated artwork.

Painted in the 1930s by Victor Arnautoff, a onetime assistant to Diego Rivera, the “Life of Washington” murals dominate the entryway to the school and have been the subject of debate for years. Critics, including parents and students, have said that high school students should not be forced to see the racism in the murals’ portrayal of enslaved African Americans and Native Americans. They wanted the frescoes painted over. Mural supporters, who included art historians, said that destroying them would be equivalent to book burning.

Arnautoff, who was a Communist, was born in Russia and taught at Stanford University. His murals depicted the first president as a slave owner and the young country as being responsible for the killing of Native Americans. But the American Indian Parent Advisory Council and other organizations at the school said that students should not be forced to see that history.

“When I as an Indigenous Pacific Islander look at the mural, I am hurt and offended,” wrote Faauuga Moliga, vice president of the San Francisco Board of Education, in a text. “I am certain most people of color who have viewed the mural at Washington feel the same as me.”

Two years ago, the school board decided to remove the murals from public view at the School, instead of painting over them — which the board had previously voted on doing.

In October 2019, the George Washington High School Alumni Association then sued the board and the school district over their decision.

On Tuesday, a Superior Court of California judge, Anne-Christine Massullo, said that San Francisco officials must comply with the California Environmental Quality Act, which was “enacted to protect California’s environmental and historical resources,” and that the school district would not be allowed to remove the murals without first conducting an environmental impact review.

Public officials have to follow those procedures “before a decision is made,” Judge Massullo wrote in her ruling.

The judge said members of a committee organized by the school board to consider the future of the murals had made up their minds before organizing public meetings. “A PowerPoint presentation,” she wrote, “did not contain one reference to keeping the murals.”

The order came in response to the lawsuit by the alumni group, which for years has sought to save the work of art, arguing that the murals provide an immersive history lesson.

Lope Yap Jr., vice president of the George Washington High School alumni association, said he knew the committee appointed by the school board “was predetermined to take down the murals.” He continued, “I’m thankful the judge agreed with that perspective.”

Mr. Moliga said that he supports the environmental review, and that as part of it, the feelings of students and their parents should be considered. “I want analysis done on how the students and families at Washington are impacted by the mural’s inclusion in the school environment.”

When reached for comment, Laura Dudnick, a school district spokeswoman, said the school is getting ready for the fall semester and that since the judge just issued this ruling, “we haven’t had time to review it thoroughly.”