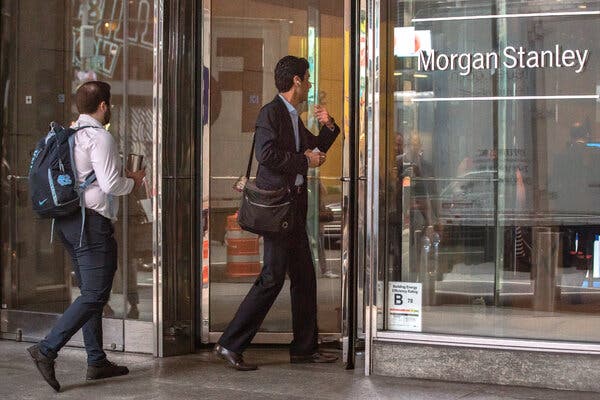 Morgan Stanley has a vaccine mandate for staff and visitors to its New York offices. Credit...Jeenah Moon for The New York Times

Hardly a day goes by without a big bank announcing a significant rise in starting salaries for its youngest employees. JPMorgan Chase, Citigroup, UBS and Morgan Stanley are now paying first-year bankers $100,000, while Evercore, Jefferies and Goldman Sachs will pay $110,000. In most cases, base salaries for first-year analysts were previously $85,000 to $95,000.

The raises come as the heavy workloads caused by high deal flow have led to complaints about burnout in the junior ranks. A notoriously grueling job has become even more challenging during the pandemic, junior bankers say, given the lack of camaraderie and networking when working in isolation from home. The surge in coronavirus cases as a result of the Delta variant has made return-to-office plans less certain, complicating many banks’ aggressive push to bring people back in the office, in part for the sake of morale.

More money could help attract and retain junior bankers, but now that most of the major players have landed at about the same rate, it isn’t necessarily a competitive advantage. Flexible working schedules for those back at the office, Zoom-free Fridays and other non-monetary perks could help. More immediately, the DealBook newsletter notes, it’s worth watching to see if pandemic precautions at the office become a differentiator in Wall Street’s war for talent.

The boutique bank Jefferies, for its part, said on Monday that it would mandate vaccines for those returning to the office, a decision made partly in response to the Delta variant. The bank’s executives said in a letter last month that while “the vast preponderance” of workers at the bank were vaccinated, it recorded 40 new cases of Covid, mostly mild but including two “short hospitalizations.”

Morgan Stanley also has a vaccine mandate for staff and visitors to its New York offices, while other banks, like Goldman Sachs, require employees to log their vaccination status before coming to the office but don’t mandate vaccination. Bank of America has said it was focused on bringing back vaccinated employees first to corporate headquarters next month.

It’s a different calculation for the biggest banks, with universal policies hard to impose on operations across the country, from Wall Street offices to Middle America retail branches. As some banks, like Wells Fargo, have recently delayed their planned office returns, JPMorgan Chase announced that it was only reinstating mask requirements for all U.S. employees, many of whom are back in offices on rotations. But a memo to staff from the bank’s operating committee flagged a potential change to its workplace policy down the road: “We deeply appreciate your efforts and will continue with our previously stated return to the office schedule as we learn more about how hybrid working may work for our company.” 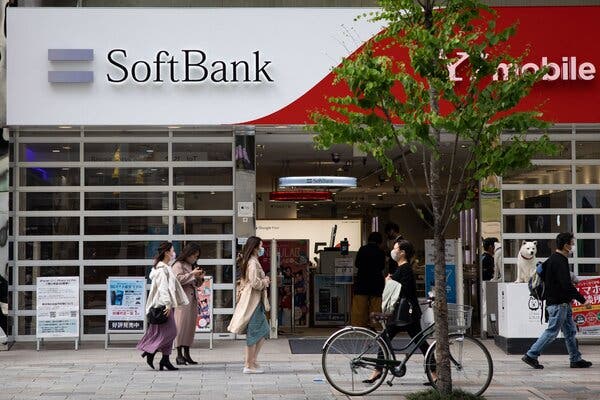 SoftBank’s investors are worried about its exposure to Chinese tech companies that are facing tougher regulatory scrutiny at home.Credit...Yuki Iwamura/Agence France-Presse — Getty Images

TOKYO — SoftBank, the Japanese conglomerate that has become a major investor in the technology space, on Tuesday reported a profit of 762 billion yen, or $6.9 billion, for the three months that ended on June 30.

That would be an impressive number for just about any company. But SoftBank could face uncertainty ahead, as technology investors focused on Chinese internet firms absorb the impact of Beijing’s tightening regulatory grip.

By the numbers, SoftBank’s profit was a nearly 40 percent drop from the year-earlier period. That year-ago period, however, included a nearly $6.7 billion gain from the loss of its control of Sprint, the American telecom that the Japanese firm sold to T-Mobile last year.

In SoftBank’s most prominent businesses these days — investing in other companies — it reported more than $11 billion in gains, compared with $8.9 billion a year earlier. SoftBank’s Vision Fund, the investment vehicle it controls, has become a technology heavyweight, strengthening the company’s bottom line.

This spring, SoftBank announced the highest annual earnings in history for a Japanese-listed company: more than $46 billion for the year that ended in March.

But with SoftBank’s successes have come a string of failures, particularly in 2019 with the spectacular implosion of the work space start-up WeWork, which cost the company billions of dollars and tarnished the reputation of its founder and impresario, Masayoshi Son.

In 2019, SoftBank began a second iteration of its Vision Fund with tens of billions of dollars of its own money after the WeWork debacle scared off other potential investors.

Last year, under pressure from outside investors, the company began a $23 billion stock buyback program, financed partly with loans against its holdings in the Chinese e-commerce giant Alibaba.

The purchases helped send its stock price to record levels. But it didn’t last: The company’s shares have fallen more than 35 percent since peaking in March.

In recent months, SoftBank’s shares have come under new pressure from investors worried about its exposure to Chinese tech companies that are facing tougher regulatory scrutiny at home. Chinese regulators have tightened their grip on an industry that flourished under light regulation in previous years. In April, regulators fined Alibaba $2.8 billion.

SoftBank said on Tuesday that it lost nearly $1 billion from financial derivatives backed by Alibaba shares. It could take another hit in the next quarter from its investments in the Chinese logistics firm Full Truck Alliance and the Chinese ride-hailing giant Didi, whose shares have dropped after it came under its own scrutiny from Beijing. SoftBank has around 50 percent of its asset tied up in Chinese firms, with 41 percent in Alibaba alone.

In an earnings conference, Mr. Son, who described himself as a risk-taker, implied that even he has its limits. The company, he said, is slowing the pace of its investments in China as it waits to see how the regulatory situation shakes out.

Asked about a possible share buyback, Mr. Son said that the company had no current plans, but given the recent decline in its stock price, it was something that warranted consideration.

The question, he said, is not if but “‘how big and when?’ That’s something that we are studying every day.” 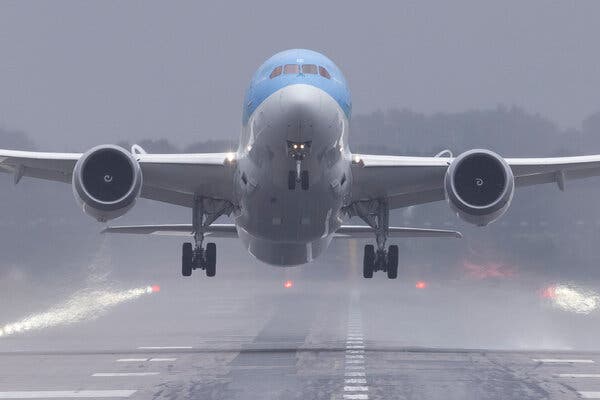 The rise in virus cases has tempered forecasts for a swift recovery in business travel.Credit...Dan Kitwood/Getty Images

Leisure travel roared back this summer, but the airline and hotel industries long depended on business travel for a substantial portion of their revenue because those customers, who often made their plans at the last minute, could be counted on to pay more for seats and rooms. Now that the pandemic has upended the notion that travel is necessary to do business, the question is how much it will resume, even when the coronavirus is brought under control.

And now the spread of the Delta variant of the virus is throwing a yet another wrench into businesses’ plans, Jane L. Levere writes in The New York Times. A pressing question is whether the jump in cases will be brief or more long-lived.

Even the experts who were most optimistic about the prospects for business travel a month or so ago have begun to temper their forecasts. The quick change was captured by a survey of 1,200 American travelers that Destination Analysts, a market research firm in San Francisco, conducted from July 21 to 23. Among business travelers, it found, nearly 25 percent expected the “coronavirus situation” to worsen in the next month, a jump from under 14 percent two weeks earlier.

The U.S. Travel Association said in late July that it continued to forecast “a modest return of business travel over the coming months, so the increase in cases has not materially affected our view.” It said it now expected that business travel would “only achieve 50 percent of 2019 levels in the fourth quarter of 2021.”

Travel experts nevertheless remain optimistic that business travel will pick up substantially later this year and early in 2022. Or as Christopher J. Nassetta, the president and chief executive of Hilton, put it on an earnings call last month, “People have to meet.”

Scott Graf, global president of BCD Meetings & Events, said that in light of the spread of the Delta variant, “we’ll likely see some cancellations or certainly meetings being pushed out by weeks or months.”

“I may be optimistic,” he added, “but it is my hope that vaccination progress will increase dramatically over the next 60 to 90 days and that the fourth quarter and early 2022 will still be quite strong.” 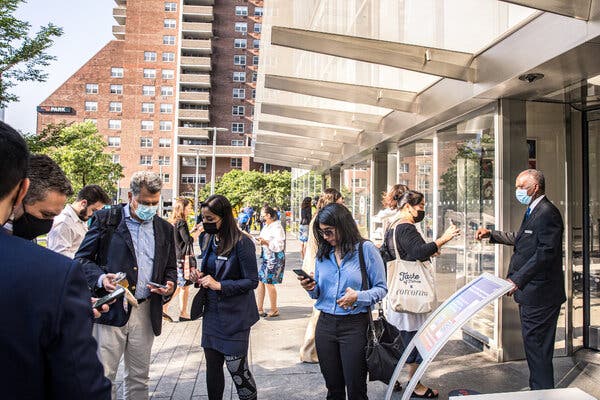 Companies are figuring out their own guidelines, leaving workers to navigate a patchwork of disparate policies.Credit...Jeenah Moon for The New York Times

As some workplaces have begun determining how to safely bring employees back to the office, the choice of getting a coronavirus vaccine is becoming increasingly public, Sydney Ember and Coral Murphy Marcos report in The New York Times.

The vaccines have been shown to be vigorously effective against severe illness and death after infection, including the highly contagious Delta variant, and public health officials, doctors and political leaders are urging inoculation. The Kaiser Family Foundation reported in late July that more than 90 percent of Covid-19 cases, hospitalizations and deaths have occurred among people who are unvaccinated or not yet fully vaccinated.

“The more people who are out there without the vaccine, the more Covid will spread,” said Luisa Borrell, distinguished professor at the CUNY Graduate School of Public Health & Health Policy.

A growing number of companies are mandating vaccines as a condition of employment, leaving unvaccinated workers at risk of being fired. CNN, which has required full vaccinations for all employees working in its offices and in the field, said on Thursday that it had fired three people who went into the office unvaccinated. Many others are adopting less sweeping — but perhaps more conspicuous — approaches, including mask mandates for unvaccinated workers or the requirement that they work remotely.

Tension between the vaccinated and the unvaccinated has simmered since the shots became more widely available in the spring. But with the virus’s resurgence has come mounting frustration among vaccinated Americans toward the unvaccinated, making some unvaccinated workers especially circumspect about revealing themselves. 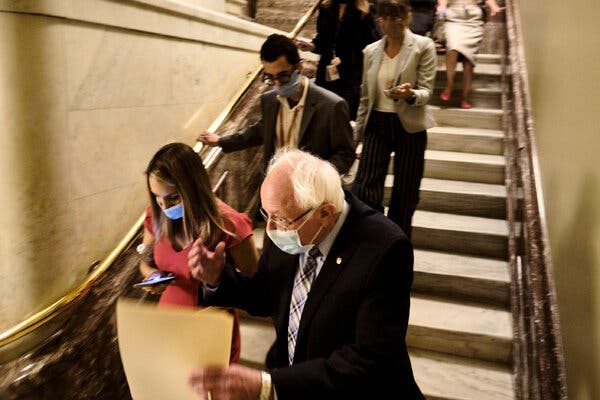 Senator Bernie Sanders, the chairman of the Budget Committee, helped write the budget resolution Democrats plan to take up after passage of the bipartisan infrastructure deal.Credit...T.J. Kirkpatrick for The New York Times

WASHINGTON — The Senate is expected on Tuesday to pass a $1 trillion bipartisan infrastructure package, capping off weeks of intense negotiations and debate over the largest federal investment in the nation’s aging public works system in more than a decade.

The legislation, which still must pass the House, would touch nearly every facet of the American economy and fortify the nation’s response to the warming of the planet.

It would greatly increase funding to modernize the nation’s power grid and finance projects to better manage climate risks, and it would devote hundreds of billions of dollars to repair and replace aging public works projects. The legislation was largely negotiated by a group of 10 Senate Republicans and Democrats and White House officials.

Nearly 70 senators from both parties voted to advance the measure over the weekend toward the final vote Tuesday, which is scheduled for 11 a.m. Despite criticism from former President Donald J. Trump, many Republicans, including Senator Mitch McConnell of Kentucky, the minority leader, were poised to embrace federal aid for their states.

But as soon as the bill clears the Senate, Democrats are expected to take up a $3.5 trillion budget blueprint that will unlock their ability to muscle through an expansive social policy package over unanimous Republican objections.

Under the fast-track budget reconciliation process, that blueprint, if passed with a simple majority, will dictate the parameters of a transformative package expected to provide funding for health care, climate change, education and child care, and to increase taxes on wealthy people and corporations.

The budget can pass, however, only after a marathon of rapid-fire votes, known as a vote-a-rama, that is expected to stretch at least through midnight Wednesday.